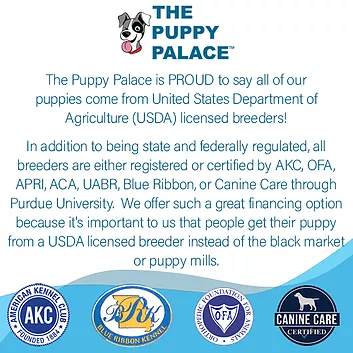 In the 1970s, animal welfare was at a critical point and euthanasia rates were spiraling out of control. Over the last forty plus years, however, the culture and care given to dogs has greatly evolved. Current standards of care include indoor/outdoor space, socialization and proper vet care. From 1973 to 2007, the number of cats and dogs in U.S. households more than doubled and animal shelter euthanasia rates dropped by more than 60% because of aggressive, effective spay/neuter campaigns (HSUS). Now, it is estimated that 85% of all of the dogs in the U.S. are spayed or neutered.

While the culture and care has greatly changed, the messaging from the animal rights organizations has not changed. They are aggressively promoting pet store bans across the country. While these efforts are well-funded and designed by national animal rights groups working with local activists, the resulting legislation is misguided and fails to produce the results they advertise.  Not one puppy mill has been shut down because of pet store bans.

In reality, none of these claims are true. In fact, statistics prove otherwise. The animal rights groups have used the power of emotion to influence unsuspecting lawmakers and the media. Below are some verifiable scientific facts to “bust” the myths promoted by these groups.

Fact: According to the ASPCA, pet stores sell as few as 4% of all dogs in the United States.

Fact: In a 2018 investigation by The Washington Post, it was reported that bidders affiliated with 86 rescue and advocacy groups and shelters throughout the United States and Canada “have spent more than $2.68 million buying 5,761 dogs and puppies from the very same breeders they scorn and label as puppy mills since 2009.”

Fact: The growing numbers of imported dogs, often strays from developing countries or from breeders who breed specifically for importation to the U.S., has led to an increase in the occurrence of zoonotic diseases (rabies, tuberculosis, and brucellosis), screwworm, and canine (Asian) flu in dogs imported into the United States, thereby risking the health of the U.S. human and pet population and agricultural animals.

Fact: The shelter and rescue systems in the United States are importing dogs to fill the public demand.  “The National Animal Interest Alliance (NAIA) site has a story from the Puerto Rico Daily Sun about 107 puppies that died of distemper on their way from the island to the New York area.”

Fact: In response to rescues and shelters importation of dogs into the United States, the National Association of State Public Health Veterinarians (NASPHV) on April 21, 2014 released a policy statement recognizing the threat to humans and animal health posed by the unregulated importation of animals — rabies, in particular.  (Source: NAIA)

Fact: The most recent credible study on shelter intakes was conducted in 1998 and found:

27.2% came from a breeder or stranger

Can pet bans keep puppy mill dogs out of communities?

Fact: There are approximately 8,500 non-licensed and unregulated breeders who sell directly to consumers over the Internet, at flea markets and in parking lots while evading federal regulatory oversight. Retail pet bans ENCOURAGE unregulated sources like puppy mills to continue their inhumane breeding practices.

For every puppy sold, a dog dies in a shelter, right?

Fact: Once you remove cats from the statistics, about 700,000 dogs are being euthanized annually, according to a recent shelter study by the Mississippi State University College of Veterinary Medicine. While one may be too many, it’s important to take into consideration that many are euthanized because they are not adoptable indicating sickness, aggression, old age, etc. The NAIA Shelter Project provides a statistical breakdown of shelter euthanizations, almost all of them are due to untreatable health problems.

Do all pet stores buy dogs from “puppy mills"?

Fact: Commercial puppy breeders who sell to pet stores are regulated by the federal government.  The U.S. Congress passed the Animal Welfare Act and assigned the USDA responsibility to inspect these breeders.  Only USDA licensed and inspected breeders are permitted to sell to pet stores.  The AWA provides minimum standards, which many licensed breeders exceed. (Source: Animal Welfare Act).

Fact: Pet store puppies receive more veterinary care and oversight during the first 12 weeks of age than other puppies, and therefore have fewer health issues than puppies from most other sources.  (Source: Pet Industry Joint Advisory Council)

Fact: American Veterinarian Medical Association (AVMA) is aware of 22 states that have lemon laws that provide legal recourse to people who purchase animals from pet dealers, later found to have a disease or defect.

Fact: According to the Washington Post, breed specific rescues and shelters purchase puppies from commercial breeders. “”Rescue generates about one-third, maybe even 40 percent of our income,” says Bob Hughes, owner of Southwest Auction Service, the biggest commercial dog auction in the country.””

Fact: NAIA Shelter project indicates that less than 5.5% of shelter pets are of purebreds and without chihuahuas and pitbulls, that number drops to 3.3%. Therefore, except for those two breeds, less than 3.3% of shelter pets are purebreds. “The bottom line is that US animal shelters operate with so little oversight, it is very difficult for people outside the sheltering community to understand much about them.”

Fact: As far back as 2006, “As many as 300,000 puppies a year are being imported, based on early estimates, according to G. Gale Galland, Veterinarian in the CDC’s Division of Global Migration and Quarantine…One rescue group — Save a Sato (Spanish slang for mixed breed) — has brought an estimated 14,000 dogs from Puerto Rico to the United States since its founding in 1996, according to Massachusetts volunteer Twig Mowatt…”It’s is easy to speculate that … enterprising rescuers and shelter directors could help developing countries become breeding grounds for stocking U.S. shelters,” said Patti L. Strand, president of the National Animal Interest Alliance (NAIS).”